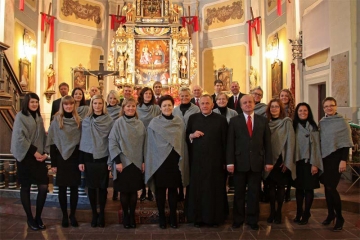 Our choir had its artistic debut on January 6th, 1985 in Wejherowo. Its founder and originator was a young graduate of the Academy of Music in Gdańsk, today its academic teacher and professor, Marek Rocławski. The foundation of the choir was enthusiastically endorsed and then significantly supported by the assistance of that dedicated music lover, the late and much talented, father Bogusław Żurawski, parish priest of St. Trinity, Wejherowo. From its inception the choir rapidly captured popular recognition, along with numerous prizes and distinctions for festival and competition performances in Poland and abroad. It undertook a series of international concert and competition tours visiting Switzerland, Sweden, Croatia, Greece, Bulgaria, Austria, Czech Republic, France, Netherlands, Germany, Great Britain, Italy and Ukraine. It established valuable contacts with many choirs and cultural organizations across the Europe. Some of these have resulted in long lasting collaborations that continue to this day. At home the choir participated in many important ceremonies of both a cultural and religious nature. Since 2001 Cantores Veiherovienses has held the status of an association, which, while granting greater independence, also enables and pushes the choir to be more self-reliant in order to raise the funding required for its statutory activities and to undertake cultural projects. The choir is also a member of the Gdansk Department of the Polish Association of Choirs and Orchestras.

In 1983 professor Marek Rocławski graduated with honours from the Department of Choral Conducting at the Academy of Music in Gdańsk where he then began his teaching career. In the years 2002 - 2008 he was a dean of the Department of Choral Conducting, Musical Education and Rhythmics. In 2012 he was appointed the Pro-rector for Organization and Education at the Music Academy of Gdańsk for a 4-year term. It is worth mentioning that Marek Rocławski also played an important social function in his town in the years 1998-2006 when he served as a councilman of the Town Council of Wejherowo. These days he is a member of the Editorial Board of the Museum of the Kashubian and Pomeranian Literature and Music of Wejherowo.