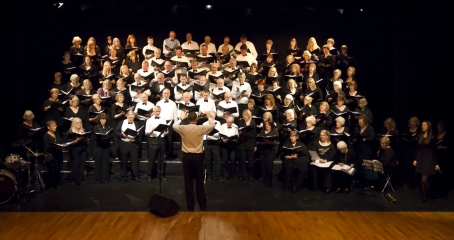 This remarkable community choir of around 130 members is delighted to be adding its considerable weight to the International Festival of Advent and Christmas Music in Bratislava. Elmbridge Choir, alongside its sister choir, Elmbridge Ladies Choir, is proud to be making its fourth appearance on the European stage. The choir’s first trip abroad was in 2009 for the Prague Advent Choral Meeting, where the choir’s lively performances entertained the Christmas market crowds. The success of that trip was followed two years later at the Krakow Advent and Christmas Choral Festival where the choir was awarded a bronze diploma in the competition. Cliff van Tonder, the choir’s Musical Director, was awarded a special certificate for the being the ‘conductor with the most feeling’! In 2012 the choir took part in Veneto Canta and had the most memorable experience of singing together with around 50 other European choirs in St Mark’s Square in Venice. Formed nine years ago, the choir continues to flourish. Thanks to Cliff’s vision and leadership, members are always given the opportunity to undertake new adventures. In addition to its programme of regular community fund-raising concerts, over the last few years the choir has recorded its own CD, has performed in concert with UK pop group ‘Blake’ and even appeared in a television commercial for T-Mobile! In 2012 the choir was invited to record a song together with an X-Factor finalist at Sky Studios to celebrate the London 2012 Paralympics, which was subsequently released as a charity single. In line with the choir’s ethos of enabling music for all, its members come from diverse backgrounds and regardless of previous musical experience or ability, the choir welcomes and embraces all who share in the joy of singing! 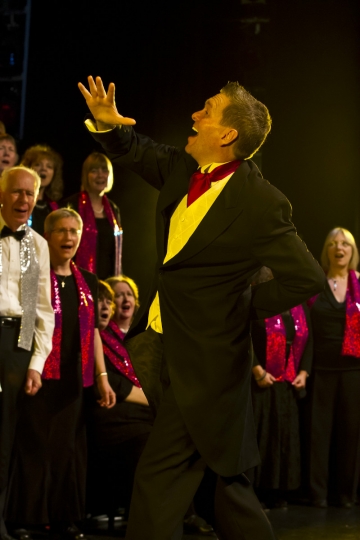 Cliff was born in Cape Town, South Africa, and spent 25 years directing and conducting congregational and regional choirs all over Southern Africa. It was his involvement in the Nkosi Johnson AIDS foundation and his desire to increase awareness of the devastation caused by AIDS that sparked the idea of forming his first choir in South Africa, Sandton Choir, which helped to raise thousands of life-saving pounds for children’s charities in and around Johannesburg. Despite his passion for music and his vast experience of leading choirs, Cliff had no formal musical training. His earliest and perhaps fondest musical memories are of teaching himself to play the organ in his local church in Durban and bravely offering his services to lead the church choir! In 1981 Cliff conceptualized and presented the first ever Choir Festival in South Africa which spread out all over the country. His personal musical highlight in South Africa was directing a mass choir of over 1,800 members in Durban City Hall in September 1986. With such drive and motivation it is hardly surprising that a year after arriving in the UK in 2004, Cliff formed Elmbridge Choir, with the mission to create a way for people from all walks of life, regardless of their musical ability, to share their passion for singing whilst giving something back to their community. Nine years later, Elmbridge Choir forms part of Surrey Community Music Society, possibly the largest charitable music society in the UK. Founded by Cliff, the society comprises two choirs (Elmbridge Choir and Elmbridge Ladies Choir) and two bands (Elmbridge Big Band and Elmbridge Young Musicians), boasting a membership of almost 300 singers and musicians aged 8 to 80! Concerts are regularly performed to raise money to fund the charity’s music grants scheme. ‘Get Music Going!’ which provides financial and practical assistance for music-related activities. One of Cliff’s recent personal achievements was the realisation of a project to record and promote a charity single celebrating the 2012 Paralympic Games, raising funds for two charities. ‘Light the Flame’ was recorded at Sky Studios by Elmbridge Choir and subsequently achieved UK and worldwide sales from the iTunes and Amazon download chart. Cliff’s energy, determination and vision are widely recognised in his local community and further afield. His musical leadership and charity management is delivered on an entirely voluntary basis, which he successfully manages alongside his career. For his community and charity work he was nominated for the BBC Surrey ‘Community Hero of the Year’ Award, and he is incredibly proud to have been shortlisted to carry the Olympic Torch in London 2012 Olympic Games. Well-deserved accolades indeed.