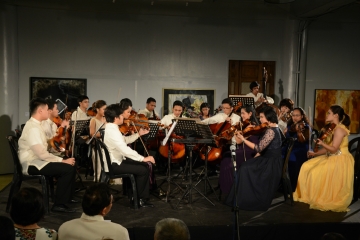 The UP ARCO (Formerly the UP String Chamber Orchestra) has its roots from 1998 during the term of the late Dean Reynaldo T. Paguio. It was conceived to become one of the resident performing groups of the College of Music; in the tradition of the former student orchestras the college had in the previous years. Today, The UP ARCO has been performing and stands independent from the orchestra class. Still under the directorship and guidance of Prof. Edna Marcil “Michi” Martinez, the group is currently composed of Nineteen (19) select student artists; all of whom are majors of the Strings and Chamber Music Department. The UP Arco is part the UP Orchestra and serves as the orchestra’s backbone, in that all its members complete the orchestra’s strings section. It is a resident performing group of the UP Theater and been featured in concerts in UP Diliman as well as major concert halls and public venues outside the university. The group has performed major string orchestra works of Buenaventura, Buencamino, Corelli, Bach, Vivaldi, Handel, Mozart, Britten, Grieg, Tchaikowsky, and Elgar. In May 2012, the UP Arco was selected and invited to represent the University of the Philippines and the country in the prestigious Festival International de Musique Universitaire – FIMU (International University Music Festival) in Belfort, France. They gave two scheduled concerts and the festival but was requested by the organizers to give a third one after receiving much ovation from the two previous performances. Aside from the FIMU the UP Arco also performed for the international community at the UNESCO Moillis in Paris, and the Filipino communities of Paris at the Saint Bernadette Church and the Notre Dame Church in Geneva, Switzerland. In the school year 2013-14, the UP Arco with the UP Orchestra was featured in UPLIFT, a concert of all UP performing groups for the victims of the world’s worst Typhoon Yolanda (Hainan). 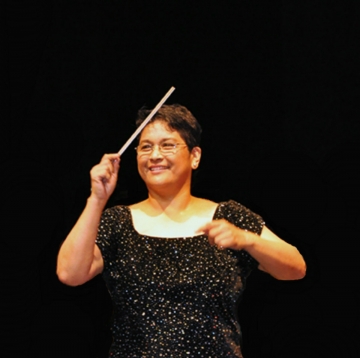 Prof. Edna Marcil “Michi” Martinez is a graduate of the U.P. College of Music. She holds a Teacher’s Diploma in Viola, a Bachelor’s Degree in Music Literature and a Master of Music Degree in Musicology. She holds the distinction as the first Viola graduate of the University of the Philippines. She first started to learn the piano at an early age from her mother, then at seven years old learned the violin with Prof. Vicente Sales and Mr Primitivo Marcelo. She later shifted to the Viola, the instrument of her choice at age 12 and was under the tutelage of Prof. Celso Estrella the UP College of Music then continued to be mentored by Prof. Rizal Reyes also at the UP until her graduation from college. In the summers of 1987 and 1989, she was under the tutelage of the imminent Australian Violist and Chamber Music Artist Winifred Durie. She has also attended master classes under internationally-acclaimed artists such as violist Norbert Blume, violinists Christoph Poppen and Carmencita Lozada. As an orchestra conductor, she counts as her first mentor, the late Prof. Reynaldo Paguio, former Dean of the UP College of Music and director of the world-acclaimed UP Concert Chorus. In 2007, she worked under Maestros Harold Farbermann and Eduardo Navega of the Conductor's Institute in Bard College, New York and was privileged to do a masterclass and have special lessons with the Internationally-reknowned conductor Maestra Helen Quach on visits to the Philippines. At present, Michi is teaching full-time with the Strings and Chamber Music Department of the U.P. College of Music, while being the Music Director and Conductor of the U.P. Orchestra and the U.P. Arco - the UP String Orchestra. She is also a member of the NPO-World Federation of Amateur Orchestras (Asia-Pacific Region).