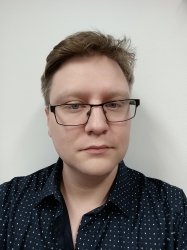 Ladislav Kaprinay studied piano and conducting at the University of Music and Performing arts in Bratislava. At present he works as choir conductor at the Slovak National Theatre and since starting of his doctoral studies as well as after finishing his PHD he works as a teacher at the University of Music and Performing arts in Bratislava and on the Conservatoire in Bratislava. He assisted at leading of Technik choir for seven years. He conducted many concerts in Slovakia and actively participated at some European music festivals. From 2009 to 2013 he worked as a piano accompanist in Opera of Slovak National Theatre. From 2013 he works on the position of a choirmaster of the Choir of Slovak National Theatre. He participated in the preparation of many operas in Slovak National Theatre and in the preparation of some choir performances outside the Theatre as well. His repertoire includes operas, e.g. Aida, Macbeth, La Traviata, Nabucco of G. Verdi, Carmen from Bizet, Cosi fan Tutte, Don Giovanni from Mozart, Cavalleria rusticana and Pagliacci from Mascagni and Leoncavallo, Eugen Onegin from Tchaikovskij, Manon Lescaut, Turandot, Tosca, La Boheme from Puccini, Lohengrin from Wagner, Fidelio from Beethoven, operas from Janáček and others. As a pianist, he works with students and professional opera singers as well, permanently accompanying them on concerts and competitions. In 2018 he participated on a creation of VŠMU Modern Choir, which he prepared for successful concert series of “Slovak Sound“ presenting young professionals from the academic scene.