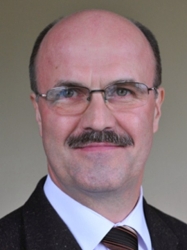 Born in 1960 in Krosno, Poland, Adam began his musical career as a graduate of the secondary music school in the clarinet class conducted by Józef Cymerman. At the university level, he graduated with Honours from the Musical Education Faculty (Institute of Choral Conducting led by Arkadiusz Baszton) at the Academy of Music in Krakow. He further acquired an Honours Degree from the Faculty of Composition, Conducting and Music Theory (Institute of Conducting led by prof. Krzysztof Missona) at the same university. From 1984 to 1994 he served as the Art Director and Conductor of the Choir of the Jagiellonian University in Krakow. In 2000, he set up the mixed choir EDUCATUS of the Pedagogical University of Krakow of which he remains the conductor to this day. In 2015, he created the String Orchestra of the Pedagogical University of Krakow. From 1996 to 1999 he worked as the Deputy Dean of the Musical Education Faculty of the Academy of Music in Krakow. Starting in 2004 he served as the Director of the Institute of Choral Conducting, Musical Education and Church Music, progressing to the role of the Dean of the Voice and Drama faculty from 2008 to 2012. Between 2012 and 2016, he was the Associate Rector of the academy. He has frequently performed concerts in Poland as well as abroad. Some of his awards include the Grand Prix, gold, and silver medals, as well as various prizes in both local and international competitions and choral festivals. He is a laureate of two Polish and two international individual conducting prizes. He has worked to perfect his skills at multiple courses including, but not limited to, the Bachakademie Stuttgart (run by professor Helmuth Rilling, German Internationalen Dirigentenseminar in Leipzig 1987) in Poland (1986, 1989), as well as in England (Choirmaster Course, 1988). He has performed in concerts with orchestras and vocalists from Poland and Europe. Since 2009, he is the Honorary Professor of Musical Arts.